Here’s a link to their YouTube video showing off the new controller.

I’m a big fan of HobbyKing. I think HobbyKing has done a lot of make radio controlled devices much more affordable. Many of my robots contain parts purchased from HobbyKing.

My assumption HobbyKing will give good deal on things they develop makes it hard for me to understand the price tag of the “Quanum V52 Ground Control System”. I’m struggling to understand why it is so expensive.

The cool Saitek controllers can be purchased from Amazon for about $130.

This means about $426 of the Quanum V52 Ground Control System’s price is for the hardware/software used to interface the Saitek controllers to the radio module. The price also includes a tripod and carrying case.

I’ve haven’t used USB controllers in my robotic projects but I doubt these controllers require more than a Raspberry Pi for the brains. The rest of the electronics should not cost much.

Besides the price, I also don’t understand why they would stick all the ports on the top of the controller.

It seems like one would end up with USB cables and trainer cables running across the LCD screen and the control buttons. I also would have preferred a knob to scroll through menus rather than relying on buttons.

Speaking of the LCD, why are they using such a small one? I’d think one of the purposes of having a ground station would be to display telemetry and other pertinent data.

They have a stand for a monitor but I have the impression this monitor will display the feed from a video camera.

Another display for data (larger than the small LCD) would have been nice.

I’ve been working (slowly) on making my own transmitter for radio controlled aircraft (and robots). I’ve been thinking a lot about various joystick options and other input options. I was initially excited to see the Quanum V52 Ground Control System but the price and the short comings just mentioned have dampened my enthusiasm for the controller.

Those Saitek controllers sure look nice. I’m now curious about how one would interface those controllers with a transmitter. I’m not sure if I personally would want such a large joystick. I’ve collected several joysticks already. I play to post some information about these various joysticks in the near future.

I plan to use this site to document my various projects. A couple of sites I admire are Bajdi’s site and Frank Zhao’s Eleccelerator.

I’ve previously documented some of my projects at Let’s Make Robots, at Hackaday.io and on Parallax’s forum.

I’m pretty sure I’ll be biased in favor of any items I don’t purchase so I’ll make sure and mention if I didn’t purchase an item. I’ll likely offered biased reviews (I’m not sure review is the best term) but I’ll be sure to let you when there’s a reason my review could be biased.

Just so there’s a picture on this page, here’s one of my “Halloween Hex.” 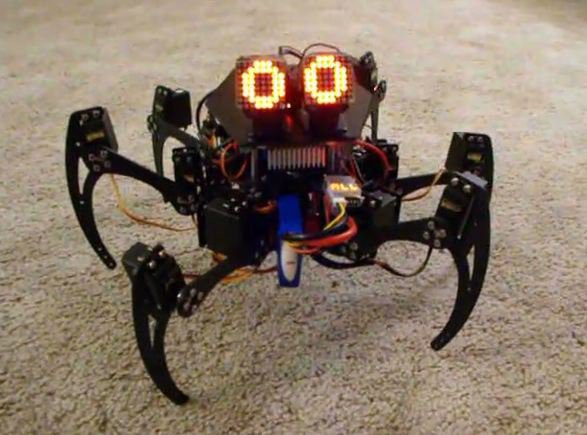